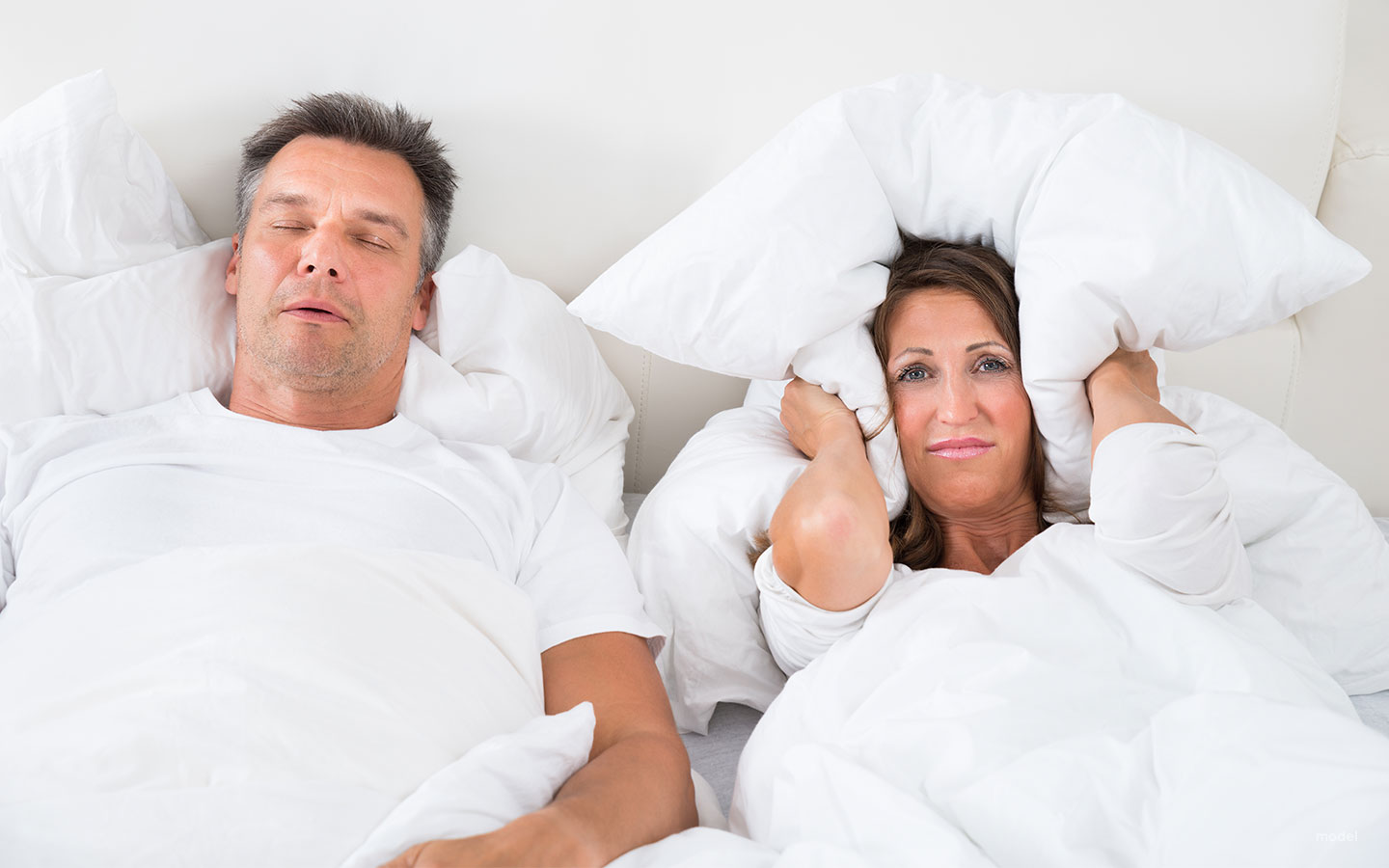 Sleep apnea, also spelled sleep apnoea, is a sleep disorder characterized by pauses in breathing or periods of shallow breathing during sleep. Each pause can last for a few seconds to a few minutes and they happen many times a night. In the most common form, this follows loud snoring. There may be a choking or snorting sound as breathing resumes. As it disrupts normal sleep, those affected may experience sleepiness or feel tired during the day. In children, it may cause problems in school or hyperactivity.

There are three forms of sleep apnea: obstructive (OSA), central (CSA), and a combination of the two called mixed.

OSA is the most common form. Risk factors for OSA include being overweight, a family history of the condition, allergies, a small airway, and enlarged tonsils. In OSA, breathing is interrupted by a blockage of airflow, while in CSA breathing stops due to a lack of effort to breathe.

People with sleep apnea may not be aware they have it. In many cases, it is first observed by a family member. Sleep apnea is often diagnosed with an overnight sleep study. For a diagnosis of sleep apnea, more than five episodes an hour must occur.

Treatment may include lifestyle changes, mouthpieces, breathing devices, and surgery. Lifestyle changes may include avoiding alcohol, losing weight, stopping smoking, and sleeping on one’s side. Breathing devices include the use of a CPAP machine. Without treatment sleep apnea may increase the risk of heart attack, stroke, diabetes, heart failure, irregular heartbeat, obesity, and motor vehicle collisions.

Sleep disorders, including sleep apnea, have become a significant health issue in the United States. The American Academy of Sleep Medicine estimates that more than 22 million Americans suffer from sleep apnea. More than 18 million Americans have moderate or severe obstructive and are suffering unnecessarily including with progressive health deterioration, despondency, depression, memory loss, cognitive impairment, diabetes, and heart disease. Unfortunately, most of these people are not aware they have sleep apnea. OSA, when left untreated, can lead to high blood pressure, chronic heart failure, atrial fibrillation, stroke, and other cardiovascular problems and is a factor in many traffic accidents and accidents with heavy machinery, owing to the persistent drowsiness suffered by many OSA patients before the disease is recognized and treated.

People with sleep apnea have problems with excessive daytime sleepiness (EDS), impaired alertness, and vision problems. OSA may increase risk for driving accidents and work-related accidents. If OSA is not treated, people are at increased risk of other health problems, such as diabetes. Death could occur from untreated OSA due to lack of oxygen to the body. Moreover, people are examined using “standard test batteries” to further identify parts of the brain that may be adversely affected by sleep apnea, including those that govern: 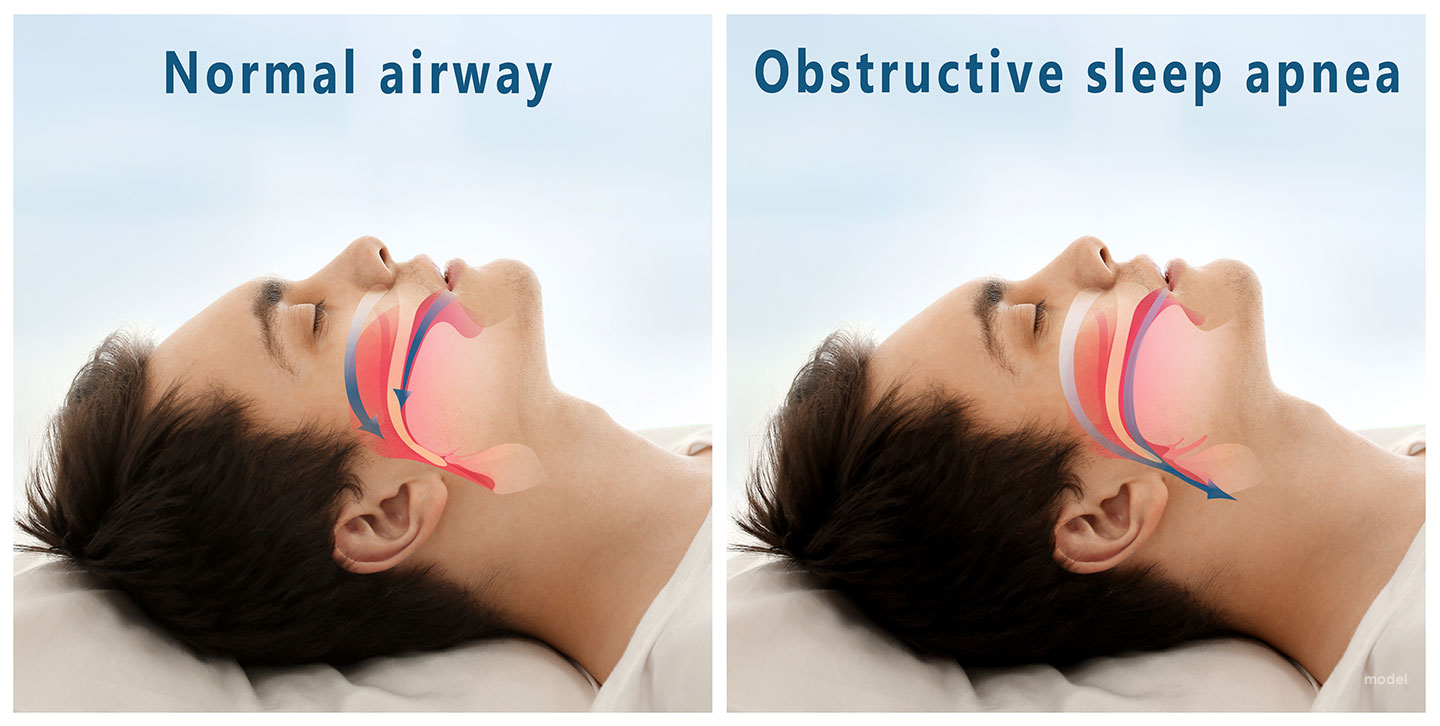 Sleep apnea can affect people regardless of sex, race, or age. However, risk factors include:

Alcohol, sedatives and tranquilizers may also promote sleep apnea by relaxing throat muscles. Smokers have sleep apnea at three times the rate of people who have never smoked.

Central sleep apnea is more often associated with any of the following risk factors: 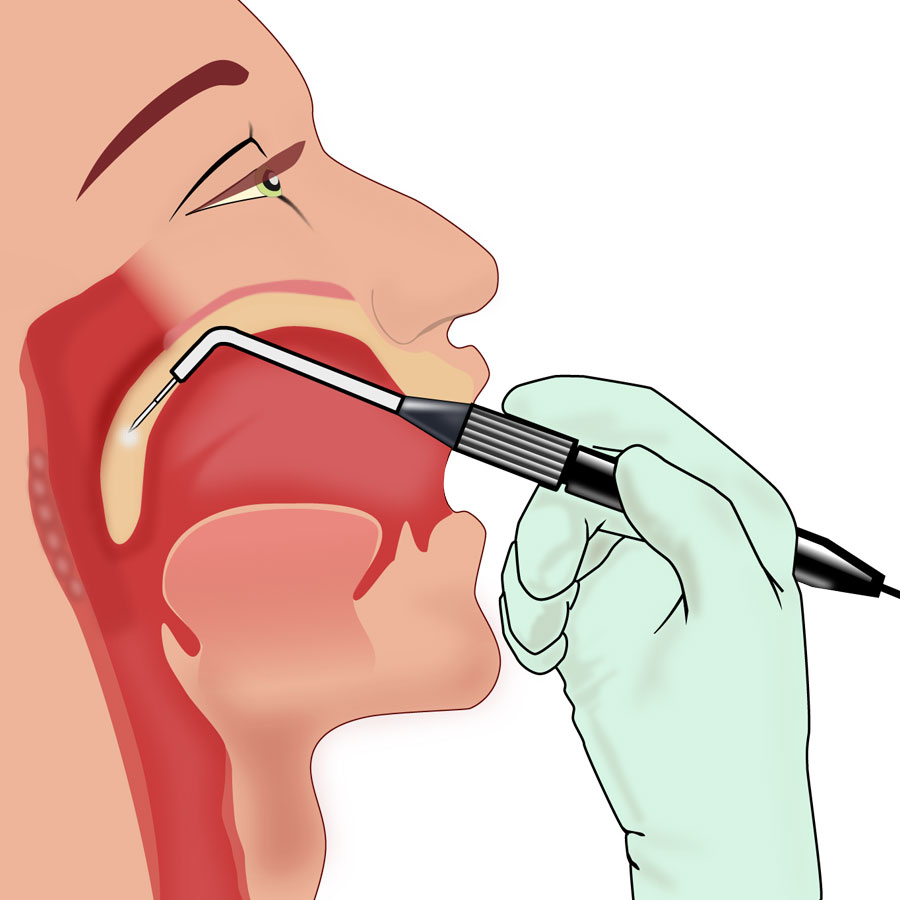 There are very effective procedures (sleep surgery) to treat sleep apnea. These include surgical and non-surgical options. Specialists at Jaw Surgery LA are trained in sleep medicine and plan the jaw surgery to optimize the jaw, face and airway anatomy for best function, esthetics, and best breathing including oxygen uptake, especially while sleeping. The airway includes the entire airway and the area behind the tongue (retro-glosssal area) and inside the nose.

Specialists at Sinus Center LA have proprietary 3-D digital imaging to help visualize the nasal anatomy and evaluate for any blockage. Effective treatments include non-surgical and surgical treatments with minimal ‘downtime’ and recovery. They collaborate with specialists at Jaw Surgery Los Angeles to co-ordinate procedures as independent treatments or in conjunction with your jaw surgery. 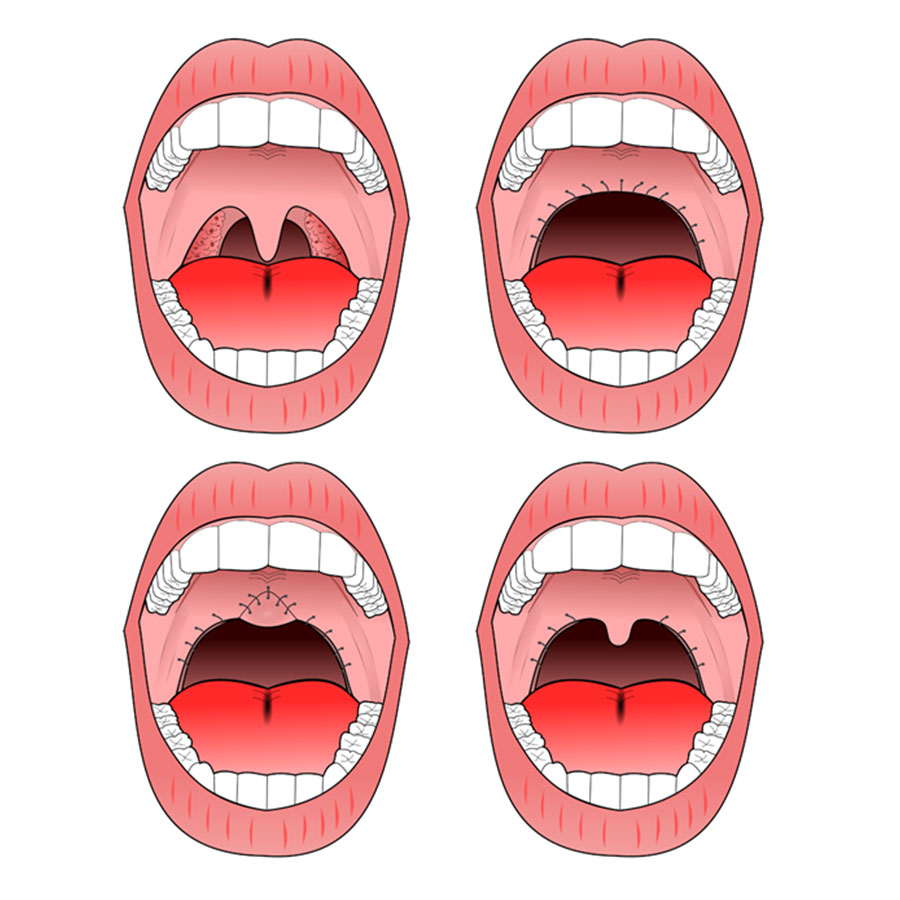 Tonsillectomy and uvulopalatopharyngoplasty (UPPP or UP3) are available to address pharyngeal obstruction.

HYPOPHARYNGEAL OR BASE OF TONGUE OBSTRUCTION

Base-of-tongue advancement by means of advancing the genial tubercle of the mandible, tongue suspension, or hyoid suspension (aka hyoid myotomy and suspension or hyoid advancement) may help with the lower pharynx.

Other surgery options may attempt to shrink or stiffen excess tissue in the mouth or throat; procedures done at either a doctor’s office or a hospital. Small shots or other treatments, sometimes in a series, are used for shrinkage, while the insertion of a small piece of stiff plastic is used in the case of surgery whose goal is to stiffen tissues.

The Stanford Center for Excellence in Sleep Disorders Medicine achieved a 95% cure rate in people with sleep apnea by surgery. Maxillomandibular advancement (MMA) is considered the most effective surgery for people with sleep apnea, because it increases the posterior airway space (PAS). The main benefit of the operation is that the oxygen saturation in the arterial blood increases. In a study published in 2008, 93.3.% of surgery patients achieved an adequate quality of life based on the Functional Outcomes of Sleep Questionnaire (FOSQ). Surgery led to a significant increase in general productivity, social outcome, activity level, vigilance, intimacy, and intercourse. Overall risks of MMA surgery are low: The Stanford University Sleep Disorders Center found 4 failures in a series of 177 patients, or about one out of 44 patients. However, health professionals are often unsure as to who should be referred for surgery and when to do so: some factors in referral may include failed use of CPAP or device use; anatomy which favors rather than impedes surgery; or significant craniofacial abnormalities which hinder device use. Maxillomandibular advancement surgery is often combined with genioglossus advancement, as both are skeletal surgeries for sleep apnea.

Several inpatient and outpatient procedures use sedation. Many drugs and agents used during surgery to relieve pain and to depress consciousness remain in the body at low amounts for hours or even days afterwards. In an individual with either central, obstructive or mixed sleep apnea, these low doses may be enough to cause life-threatening irregularities in breathing or collapses in a patient’s airways. Use of analgesics and sedatives in these patients postoperatively should therefore be minimized or avoided.

Surgery on the mouth and throat, as well as dental surgery and procedures, can result in postoperative swelling of the lining of the mouth and other areas that affect the airway. Even when the surgical procedure is designed to improve the airway, such as tonsillectomy and adenoidectomy or tongue reduction, swelling may negate some of the effects in the immediate postoperative period. Once the swelling resolves and the palate becomes tightened by postoperative scarring, however, the full benefit of the surgery may be noticed.

A person with sleep apnea undergoing any medical treatment must make sure his or her doctor and anesthetist are informed about the sleep apnea. Alternative and emergency procedures may be necessary to maintain the airway of sleep apnea patients.